udson, New York, is a city that, at the end of the twentieth century, was described primarily as dying, or some municipal-speak synonym thereof: fading, decaying, the somewhat more optimistic struggling. You might even throw industrial in there, because at this moment in America, built into the term industry is its implicit decline, the concept of manufacturing itself now seeming archaic. In a word-association game, throw out the word “factory” and expect responses like grime, poverty, Dickens, decay; expect the image conjured to be something shuttered, not a pane of glass intact. Hudson wasn’t always industrial though: not when it was founded as a port city in 1785, and not now, decades after the majority of its remaining factories shut down. Now the city has reinvented itself as a tourist destination, the primary draws being its proximity to New York City and its notable architectural charms, an array of styles ranging from the Federal to the Georgian to the Greek Revival and beyond. The diversity of architecture can be attributed to both the span of time over which they were constructed and to another old-fashioned-sounding term closely linked to the industrial, which is industrialists. When Hudson was establishing itself as a manufacturing center, there was no such thing as nouveau riche, just plain rich, and it was the industrialists who got to set the bar for what that was going to mean in America. Back then, it mostly meant attempting to emulate the European. Columns were Greek. Balconies were Italianate. Much was gilded. These are the places that are now cataloged in historic registers, remarkable to us today because the extravagance is both shocking and, viewed from our more austere contemporary architectural paradigm, provincial. These are the places ripe for conversion to B&Bs operated and visited largely by Park Slope parents seeking a getaway from the traffic and noise—but not the lattes—of the city. This is the Hudson profiled by writer Amy Thomas in a 2016 article in The New York Times, in which she’s charmed by a man on the street who identifies and calls out by name the designer of her dress. The man is a local only because he made himself one, a kindred to the journalist, who claims spaces rather than inherits them. 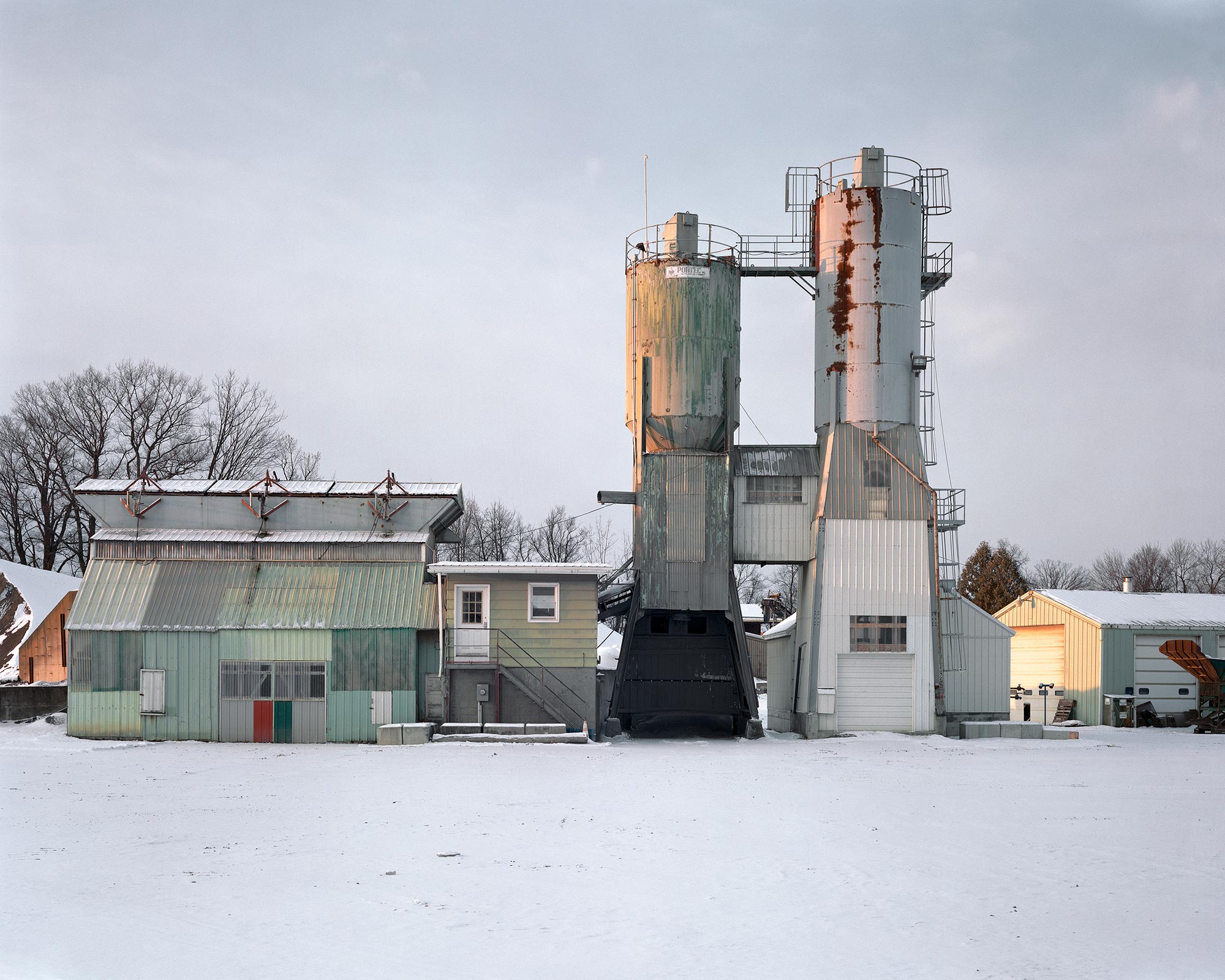 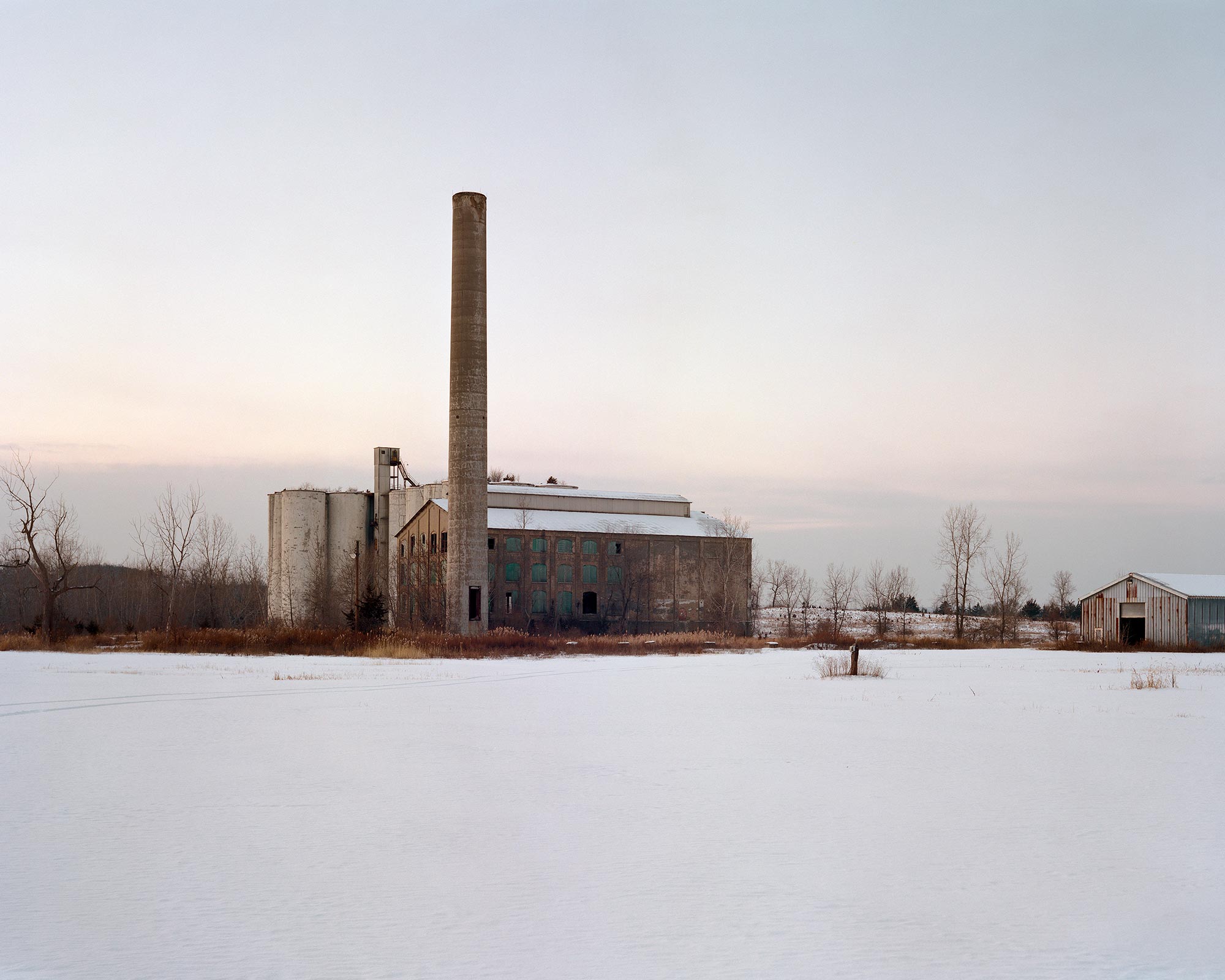 Revitalization is a positive thing. No urban planner or economist would tell you otherwise. A family with children in a school district suddenly buoyed by the financial advantages of their new neighbors probably wouldn’t tell you otherwise, though they might scratch their heads at the real estate developer’s sudden interest in what had recently been a single-screen movie theater–cum–Pentecostal church, and they might flinch at the next tax assessment on the triple-decker building they own and live in, along with two sets of cousins in the second and third floors, who help carry the mortgage. Nobody wants to be mired in the past, except for maybe those whose pasts contain more glory than their futures contain potential, and even people for whom that’s true would have a hard time acknowledging that.

But let’s not be coy about what revitalization is. Revitalization is less concerned with history than with the future. Sometimes revitalization will incorporate “historic preservation” into its agenda, which suggests an interest in honoring and protecting our past cultural selves, but make no mistake: it’s mainly interested in the parts that corroborate our current tastes. And while loss is implicit in the term “revitalization”—after all, that which is thriving need not be resuscitated—really it’s more about replacement than restoration.

Anyway, whether or not you’re interested, aesthetically, in old things is really just a matter of preference. Whether you’d rather book your weekend Hudson getaway in a carved walnut four-post bed at a restored Queen Anne or on a Japanese sleeping mat in a contemporary concrete-and-glass urban loft says more about your tastes than about your value system.

But what you choose to acknowledge, I think, isn’t irrelevant at all. 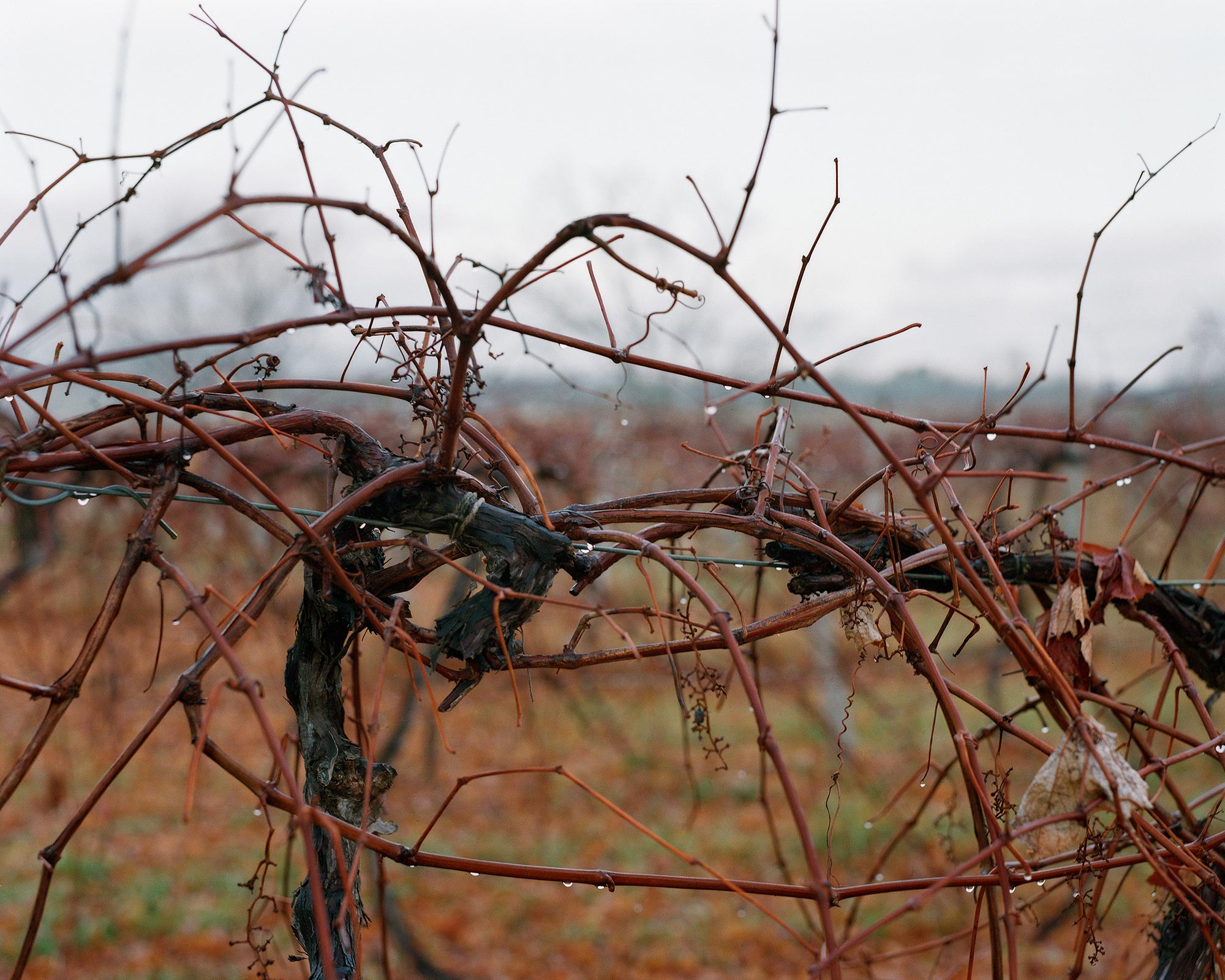 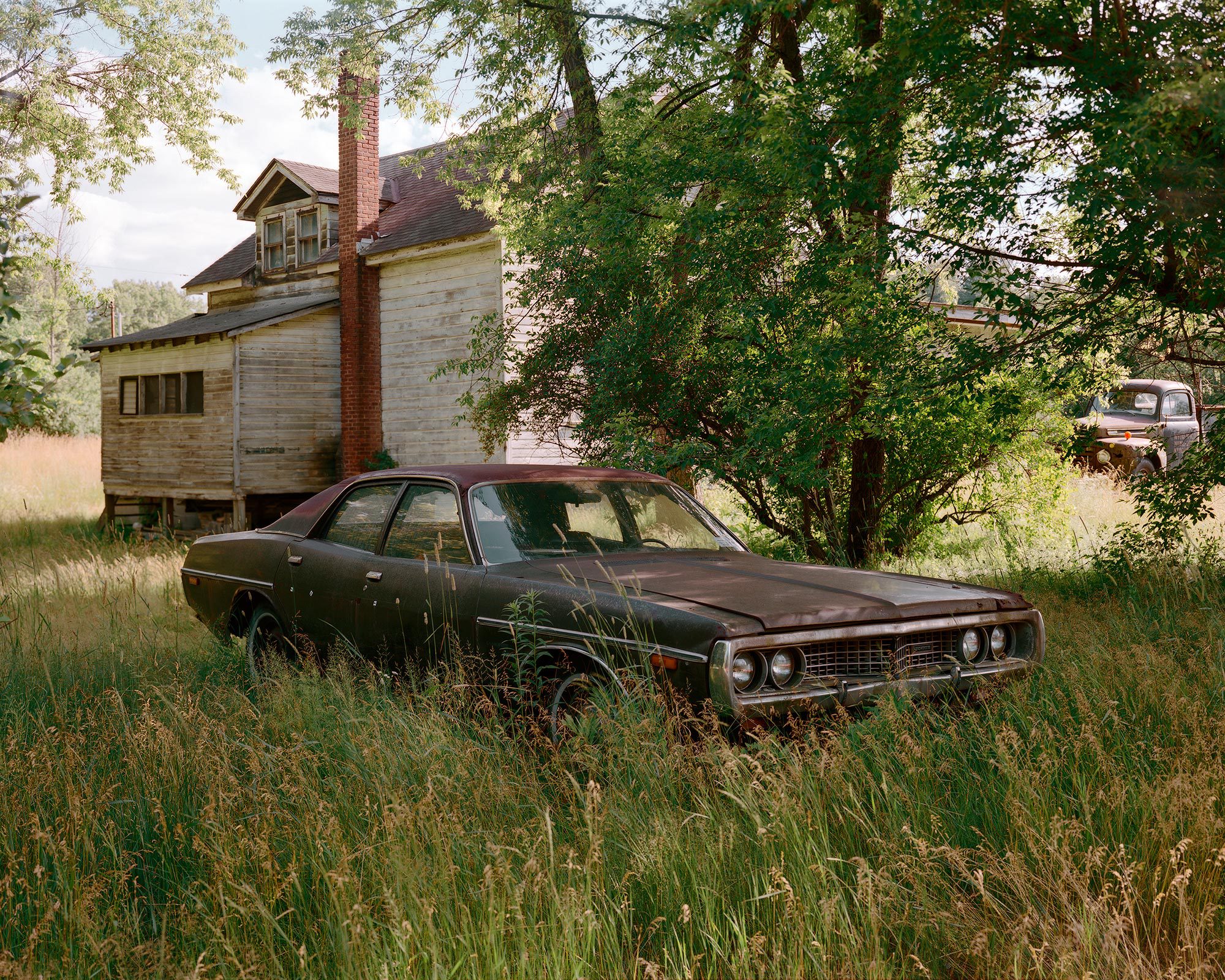 The focus of Tema Stauffer’s photographs of Hudson and its neighboring places—Livingston, Germantown, Kinderhook, areas unincorporated or merely unidentified acres along State Route 9—isn’t grandeur. She’s not there to document what’s easy to see. There are pretty things, but they’re not things that have been designated by committee as such. They’re things you drive past, or people you walk away from. Stauffer lingers. That’s significant. It makes me think of a lecture I heard in the summer of 2017 by the author Charles Baxter, which he called “Things About to Disappear”: “In an age of anarcho-capitalism, one of the most subversive of all activities is to remember how things were, and how they felt, and what people did. Such remembering is not nostalgia. This is what it means to be alive at a particular time with a functioning memory.” I would add that it’s not simply remembering what seems significant that’s a radical act; it’s paying attention to what you’ve been trained to ignore.

It can be uncomfortable to look deeply at something in which loss is the most obvious thing to see, and this can, at first, seem to be the case with Stauffer’s photographs: the foliage from the sumac trees; the lives from the deer; the squatters from the Furgary Shacks, riverfront fishing shanties constructed from materials salvaged from other places that were lost at some point even further back in time. This is not the Hudson of the weekend getaway; it’s the Hudson that tourists, most likely, would prefer to bypass, the places and people to which the newfound service economy has yet to trickle down. It’s strange, though, that the loss in the photos is what I suspect many viewers—myself included—would feel most strongly at first glance, because something lost, by definition, isn’t there. We may sense, but can’t see, the wool flannels that were once hung to dry in a Livingston shack after being soaked from Hudson River spray and cold November drizzle, just as we can’t see the bodies that wore and later hung them. What we can see are the hangers, tangled into a form that resembles a Calder mobile. We can see the shadows of the trees that have grown over the house, and the light that creates the shadows. But we think about the vacancy first, despite the population of objects, both natural and not, that are left behind.

I’m not suggesting it’s inappropriate to feel some distress when confronted with evidence of decline. It’s natural to wonder about what used to be, or what transpired between the construction of, say, that Livingston shack and its current state. It’s just that the object we see at that moment is only part of the story, and not necessarily the end of it. What’s remarkable to me about Stauffer’s photographs is that she equally dignifies what was and what remains. Despite having been captured in an instant, the developed images reference several times at once: the origin; the abandonment; the moment of the shot; the present. There’s the story of loss and the story of what’s still there, and to call it a tragedy is to ignore that which is left, which contains as many multitudes as what’s departed and what will someday, presumably, replace it. It’s hard to assign the term blight to any of it when viewed through that lens. It’s all just there, enduring, and isn’t endurance something to admire? 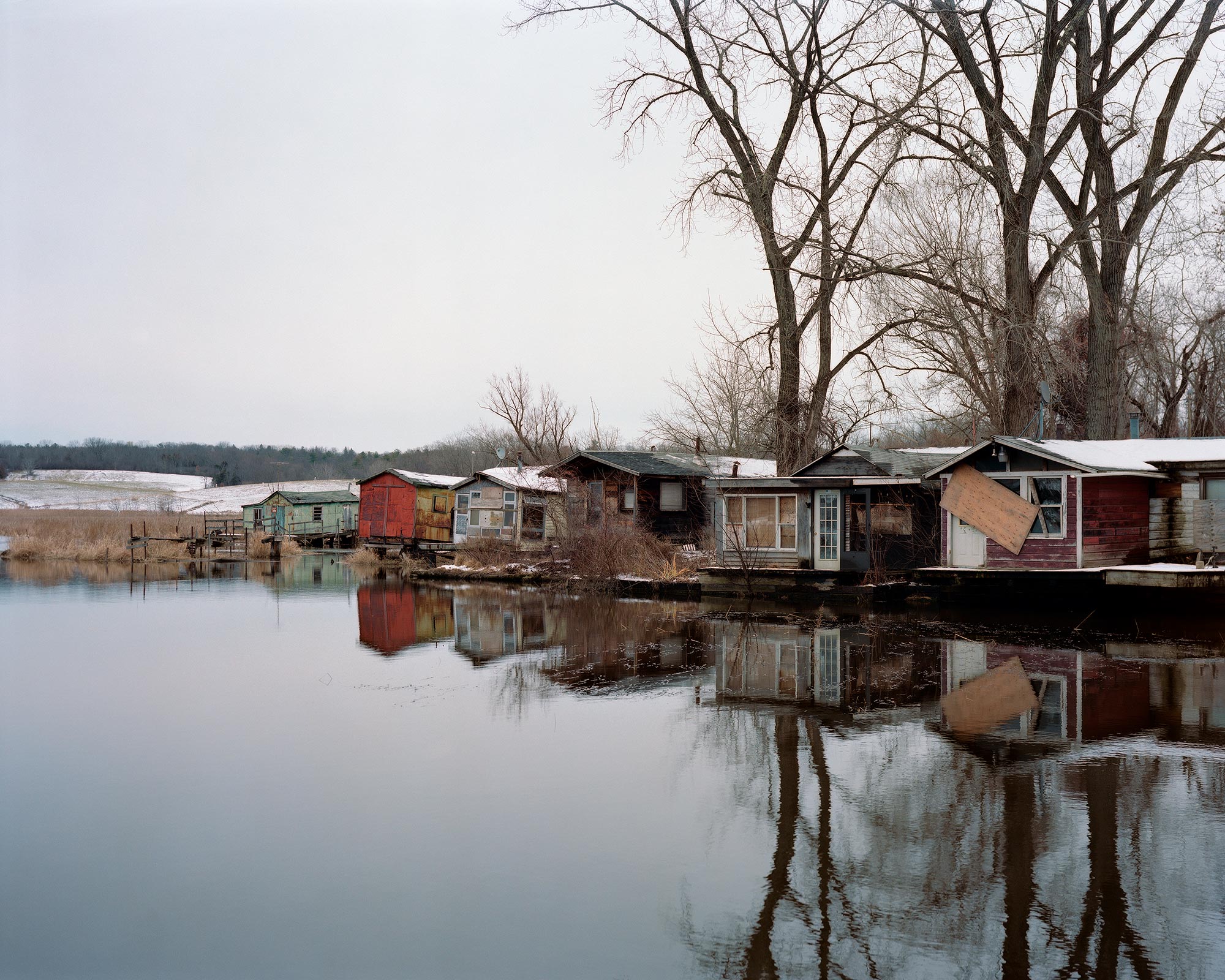 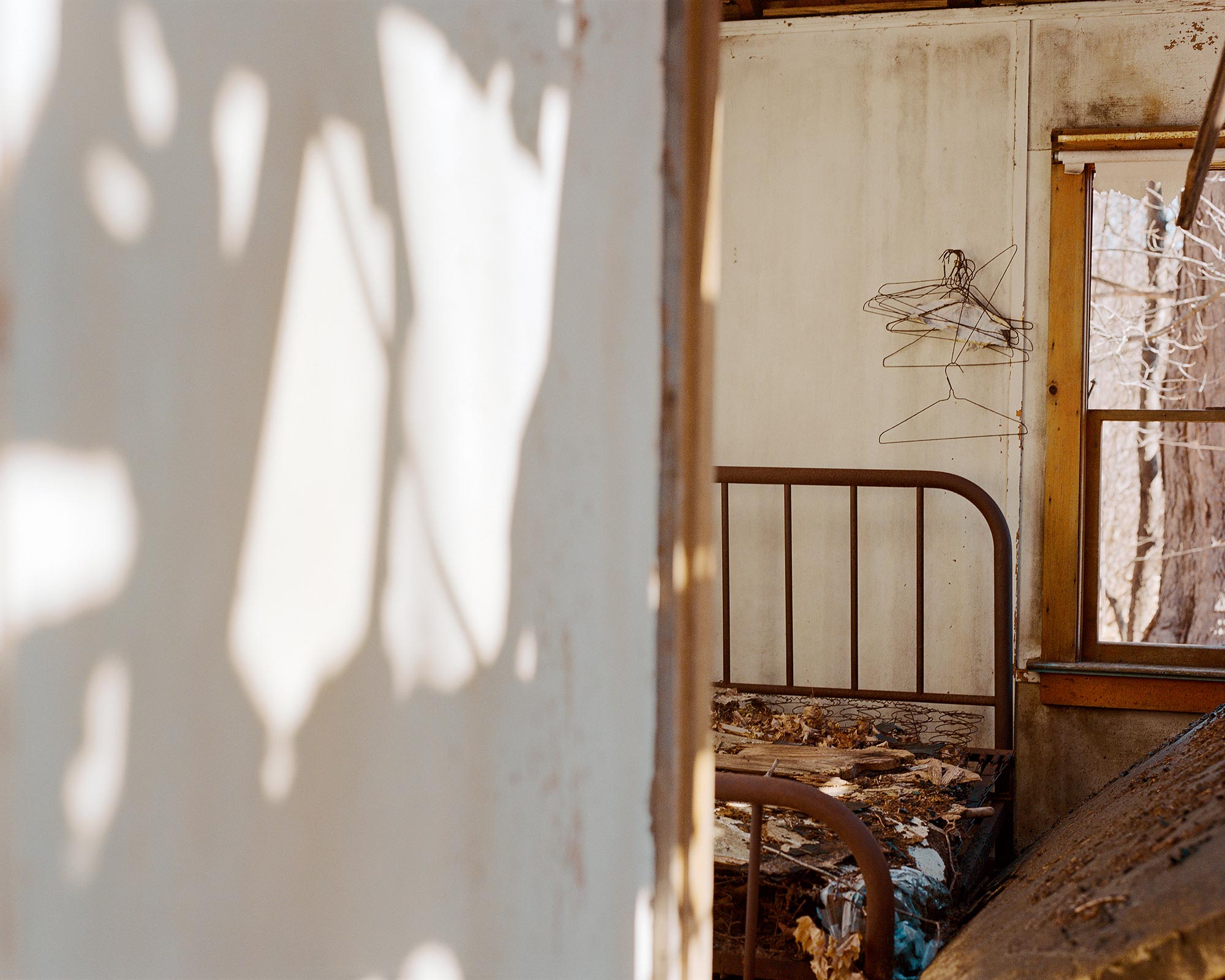 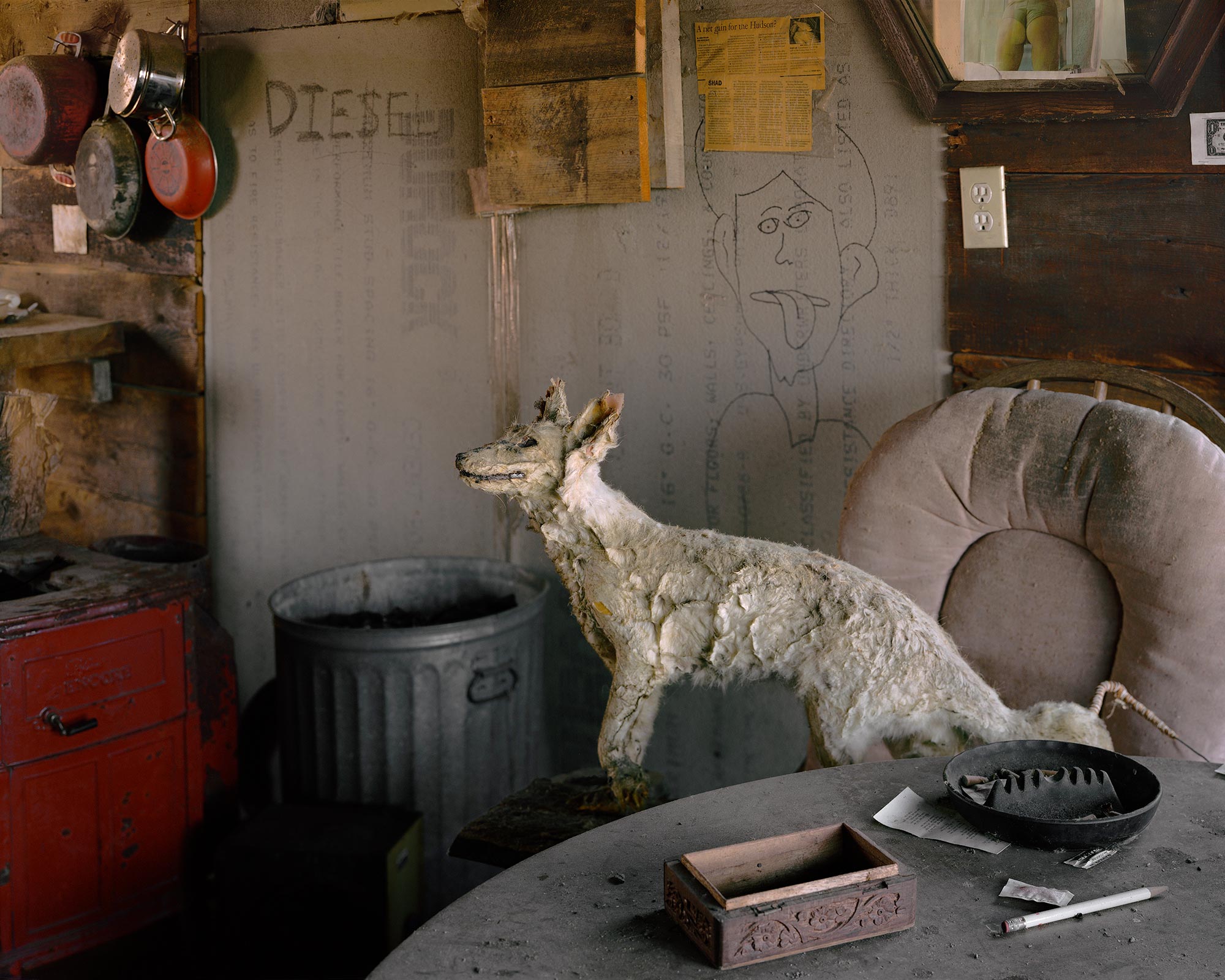 A few of the photographs in Upstate feature men both young and old—sometimes both at once, as with Mike, his cheeks a shade of pink shared by the newly born and the weathered, conditions that seem to meet in the middle with him—but more feature the absence of mankind rather than its presence. A path through a copse is there to accommodate something human, whether footsteps or ATVs, but it appears given back over to nature, crusted over with a lacquer of ice that seems almost protective. Landscapes abut the industrial, like a snowy field against an abandoned cement plant so isolated that one wonders how it landed there, how it was even accessible to the people who must have once manned it. And then there are the houses and shacks that have gone seemingly feral. These structures are obviously man-made, which means they’re by definition unnatural, but they only seem that way when man has deserted them. Then they’re incongruous, belonging to neither the landscape nor to any civilization. They’re dysfunctional, or they’ve at least ceased to be what they were intended to be.

But all of these things still exist, which means they have to be something. They haven’t disappeared; they’re simply rarely acknowledged. And looking closer, despite the absence of people—families or fishermen—there’s something vibrant in there. The houses seem still, and of course the photos are still, but there’s almost a sense of animation if you linger on them. The layers of wall-paper on the walls of the bedroom in the Oliver Bronson House have eroded, leaving globs of exposed plaster that resemble land masses in a cerulean ocean, as if a map for some world that’s only recently been discovered. And while decay, at least in Western culture, is almost always seen as something negative, a byproduct of death, even decay is a physical process: there’s movement there, even if we can’t see it, and that movement suggests something like life. 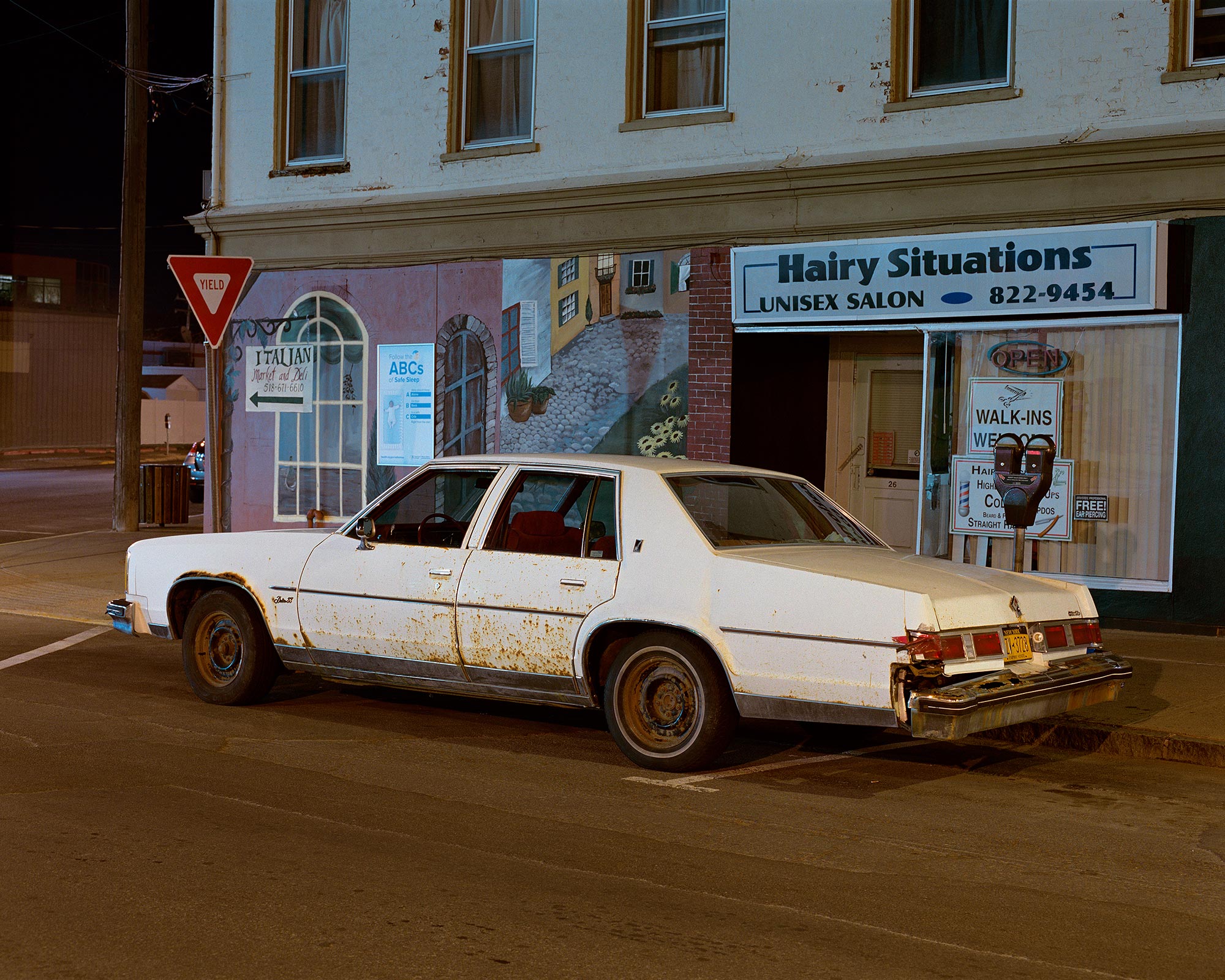 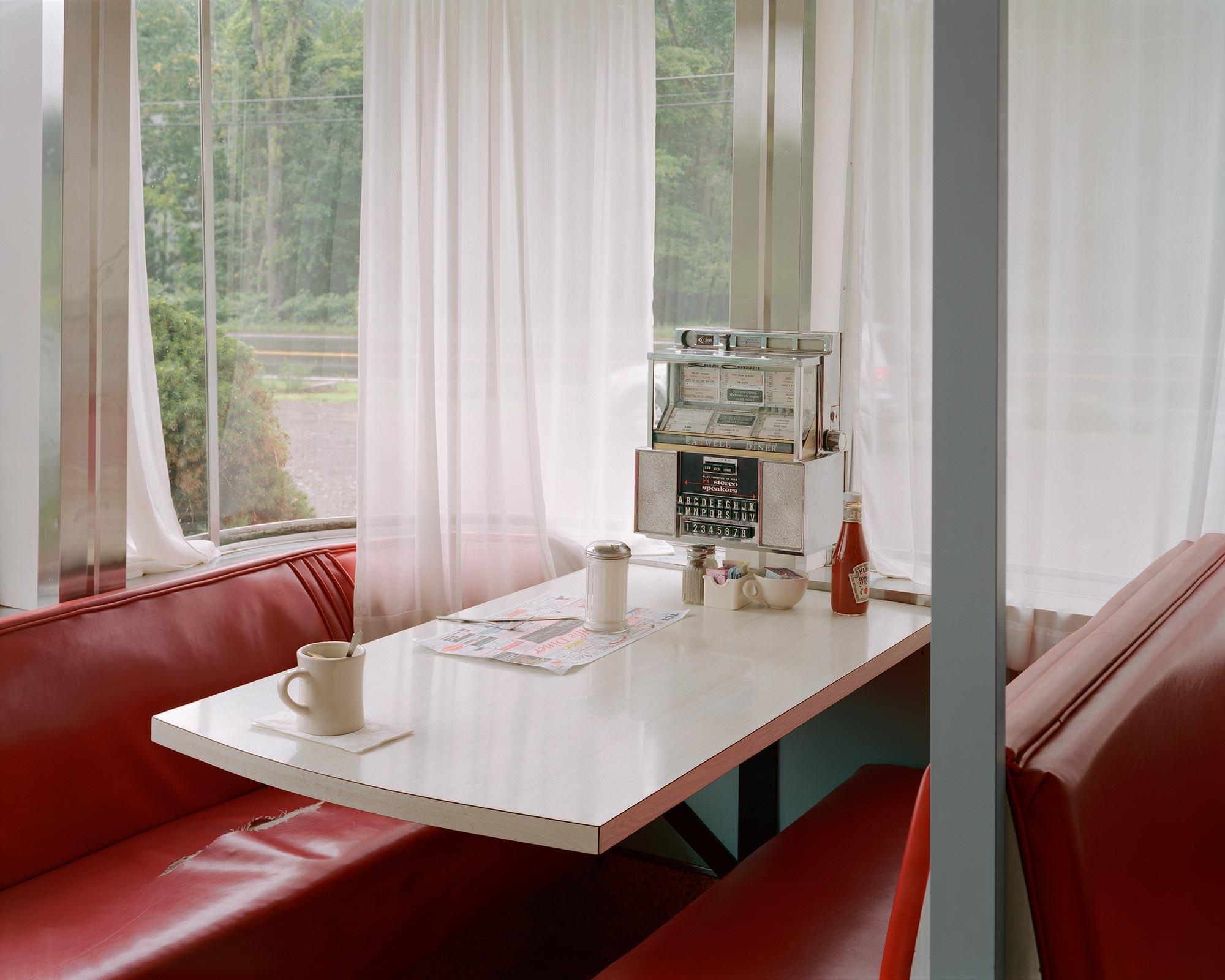 Not all of the buildings in the photographs are abandoned. There are signs of literal life in many of them: storefronts that are dim just for the night, a rusted but presumably operative sedan parked alongside them; a set of patio chairs positioned deliberately outside of a red house on Columbia Turnpike, suggesting they won’t remain empty for long; a coffee mug weighting down a diner check, lest the breeze of a passing waitress send it flitting.

All of it—the vacant and the occupied, the restored and the disclaimed—are necessary to a project titled Upstate, at least if it’s named honestly.

Hudson encompasses 2.16 square miles of land mass. The remaining Furgary shacks sit about a quarter mile away from one of the upscale restored historic hotels mentioned in the 2016 New York Times article; Google Maps tells me it’s a two-minute walk from the hotel to the triple-decker houses on Allen Street. Each of these comprise equally legitimate parts of the region, even if most of the homes in Hudson won’t ever appear in tourism brochures. Really, though, if you were blindfolded and dropped into these streets without being told your destination, it’d likely be the diners and the multi-family buildings, not the gastropubs and mansions, that would tell you where you were, or where you were generally. Tasteful things share a predetermined, if ever-shifting, aesthetic; Hudson’s Victorians and Greek Revivals were built to emulate the Victorians and Greek Revivals of the moneyed corners of many other cities. The images in Upstate show deference to the structures unique to northeastern factory towns, like Greek diners and triple-deckers so alike you can hardly tell one from the other unless you look hard. 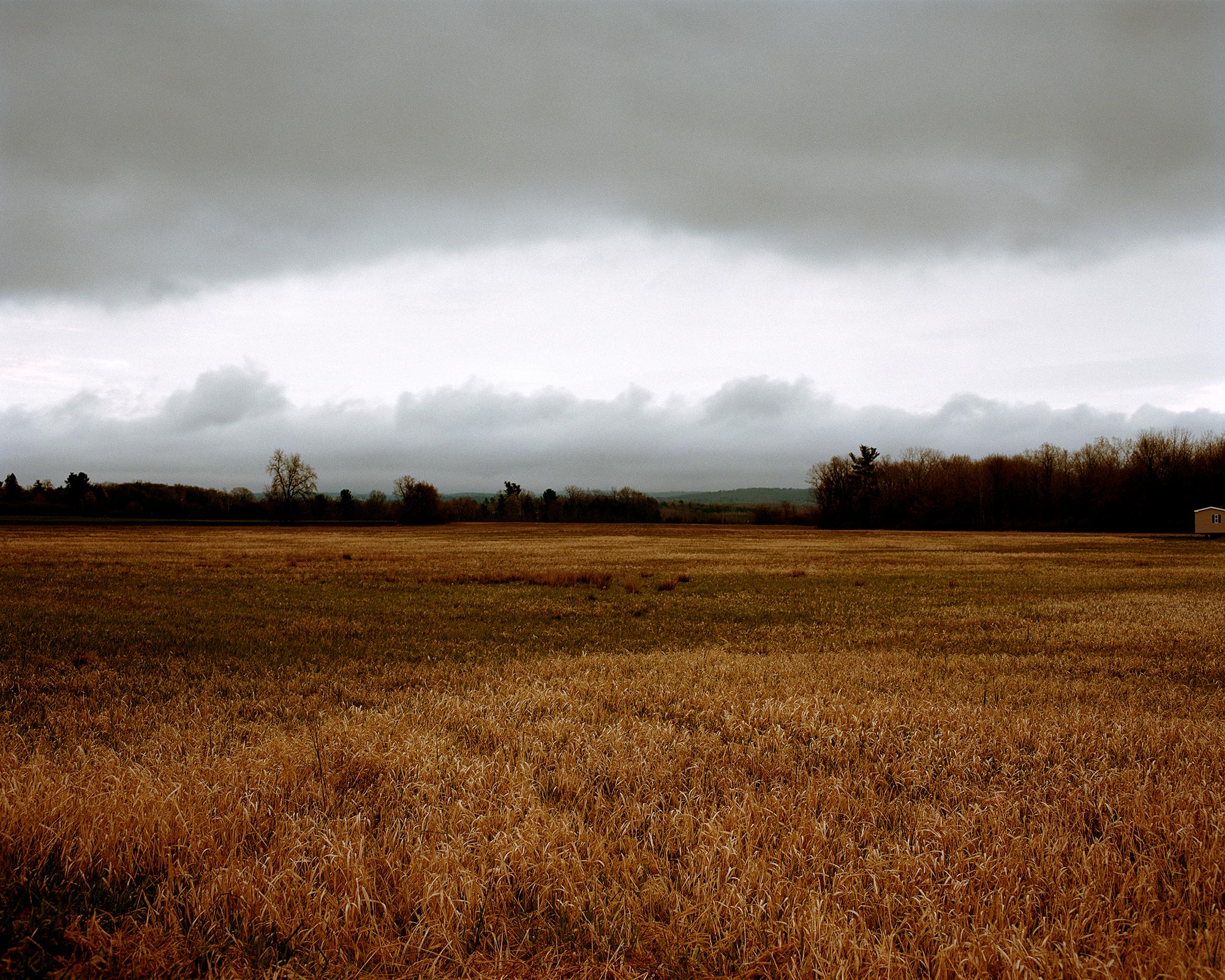 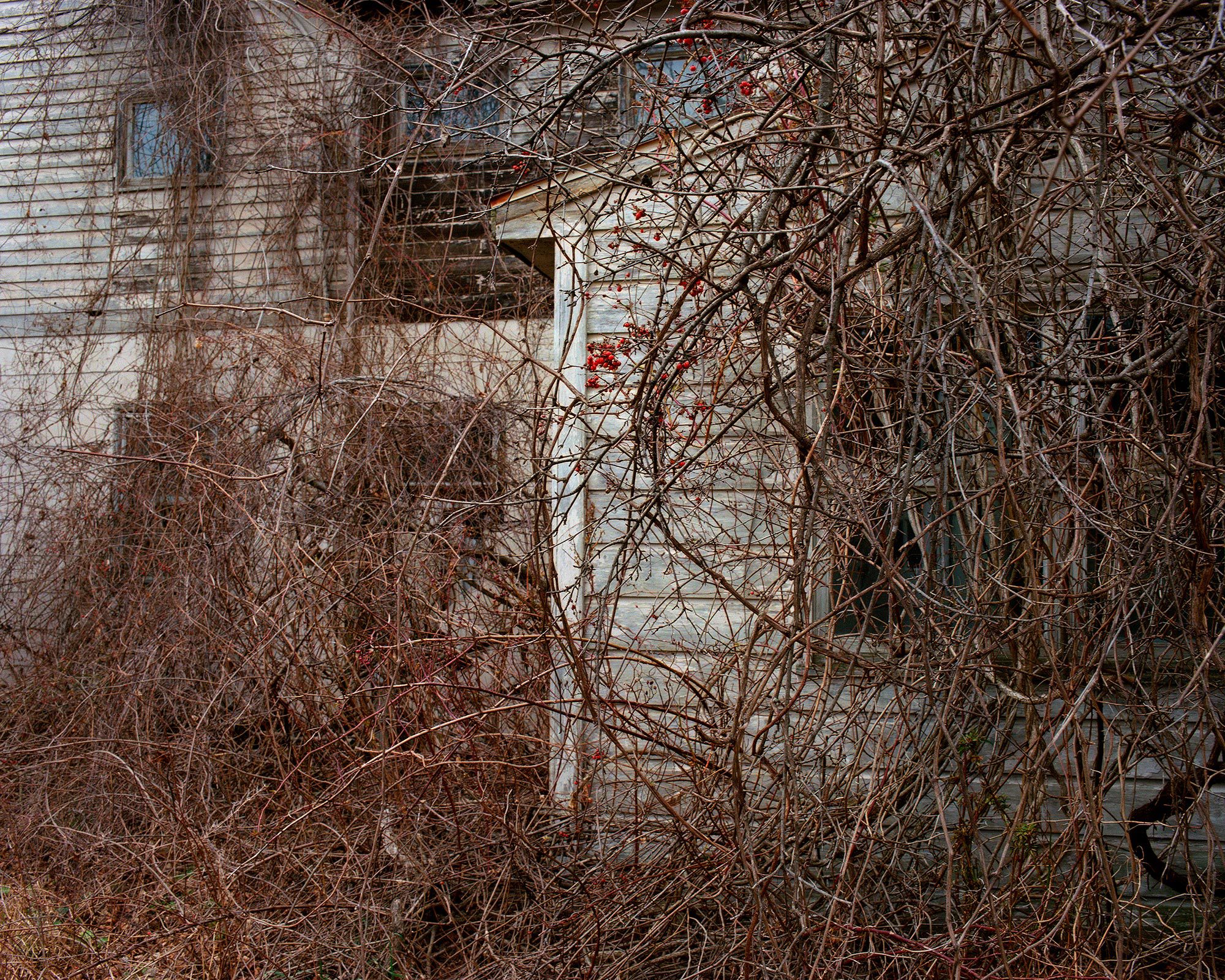 Xhenet Aliu is the author of the novel Brass (Random House, 2018) and the story collection Domesticated Wild Things and Other Stories (University of Nebraska Press, 2013), winner of the Prairie Schooner Book Prize in Fiction. Her fiction, essays, and criticism have appeared in The New York Times, Glimmer Train, American Short Fiction, Lenny Letter, LitHub, BuzzFeed, Hobart, and elsewhere, and she has received fellowships from the Bread Loaf Writers’ Conference and the Djerassi Resident Artists Program, a grant from the Elizabeth George Foundation, and other commendations, including a special mention in the Pushcart Prize anthology.

Tema Stauffer’s photographs make me look hard. They make me wonder. They make me acknowledge how many times I’ve walked past buildings just like the ones on Allen Street without stopping to do so. They make me remember the old triple-decker I grew up in and the many more I’ve since passed by in a hurry, and think about what it means to live in a place not meant to be seen.