hen a 200-foot high fireball chased by billowing smoke filled the sky above the Indian Point nuclear power plant on a Saturday afternoon in early May 2015 it was an auspicious reminder of a greater tragedy that may one day come.

As emergency vehicles rushed to the site from all directions to address what turned out be a transformer fire, loudspeakers near the plant could be heard blasting: “This is not a drill, Please be aware, This is not a drill.” The plant’s neighbors – twenty million live within a fifty-mile radius – were scarily reminded of the reality of having a nuclear power plant in your backyard. The result of this fire was thousands of gallons of oil and fire-fighting foam seeping into the Hudson River. The result of an accident that exposes spent radioactive fuel rods or a fire in one of the nuclear reactors is so potentially horrific that the residents within the most-at-risk zone simply don’t allow themselves to imagine it.

… 1,500 tons of radioactive waste is stored at the facility with no solid containment structure in place…

If – or when – there is a more serious incident the “This is a not a drill” message will take on an entirely different meaning. Imagine the confusion and hysteria of those twenty million people all trying to flee the nuclear blast zone simultaneously. (The Nuclear Regulatory Commission designates the area within ten miles of the facility as most-at-risk, but an airborne nuclear plume could reach tens of millions.)

The day after the fire the NRC designated the incident an “unusual event,” the lowest of four categories the agency gives to potential safety or security threats at nuclear plants. Reactor No. 3 was shut down for two weeks. 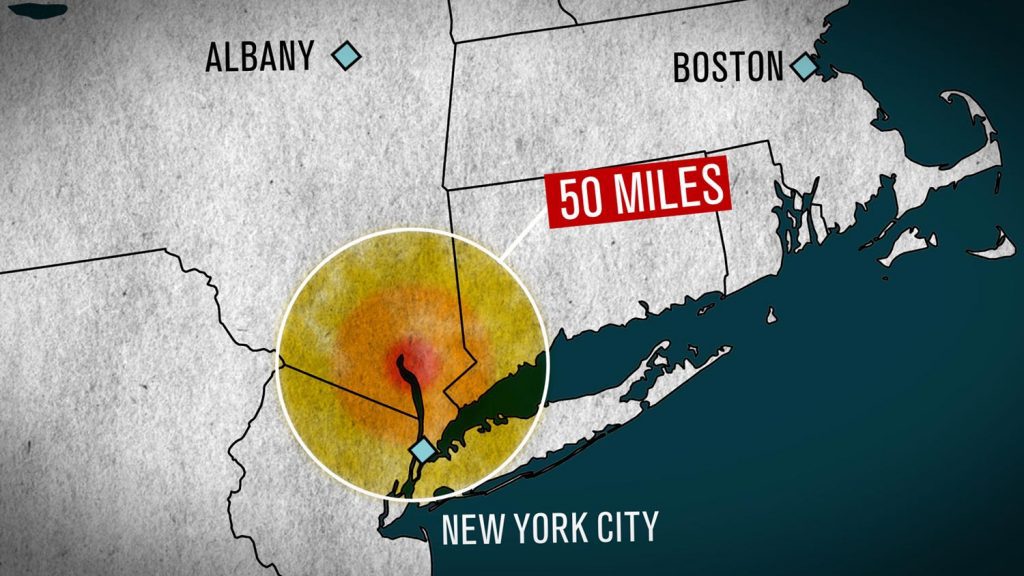 Upwards of 20 million people live within 50 miles of the Indian Point Nuclear Plant.

While we shot video interviews on a warm summer morning in the middle of the Hudson, the five of us on the boat were amazed by how little protection surrounds the plant. We sat a couple hundred yards off the plant as tourist boats and barges motored past. The only thing separating us and the plant were a couple buoys warning to stay away. From the river, no patrol boat, no fences protect the nuclear plant.

By comparison, later the same day we attempted to motor around the construction zone beneath the Tappan Zee Bridge and were chased away by police boats with lights and sirens. The irony that the bridge project is better guarded than the nuclear plant was not lost on us.

The lone argument for keeping the plant open seems to be that we, maybe particularly New York City, need the energy it produces (about 12.5 percent of energy needs for downstate New York.) Critics contend the energy Indian Point provides could be made up from other sources, ranging from alternatives and conservation to natural gas and hydropower.

Arguments for its closing include the fact the plant does not meet more than one hundred federal fire safety standards, the fact that the NRC rates Indian Point the most earthquake vulnerable nuclear facility in the U.S., that 1,500 tons of radioactive waste is stored at the facility with no solid containment structure in place and that radioactive contaminants, including Strontium-90, Celsium-137 and Tritium have been leaking from spent fuel pools into the groundwater and Hudson River for decades.

Indian Point Nuclear Power plant is a once-through cooling system. Indian Point uses water sucked in directly from the Hudson River (2.5 billion gallons a day!) to cool its reactors and then release heated water back into the river.

This process is detrimental to marine life in the Hudson River. Water taken into the plant is screened and often large fish will become stuck on these screens. For fish eggs and microscopic organisms they pass directly through the screens and are destroyed by high pressure, temperature changes, and in some cases, chemical poisoning.